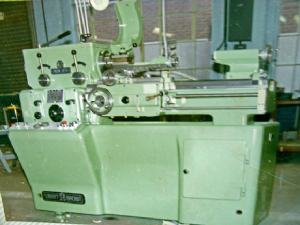 The Smart and Brown 1024 5.5" x 24" toolroom lathe was manufactured from the late 1950s and until the early 1990s (in variable-speed drive form) - and is still very much sought after today as an example of a machine tool which was produced to the highest possible standards and not down to a price. On the original Mk. 1 model 12 spindle speeds were available, from 30 to 2500 rpm, and the headstock pulley ran on its own ball journal bearings concentric with, but independently of, the main headstock spindle.

A 3-speed, 3-phase motor rated 1/1.5/2 H.P. was located in the base and drove upwards to a two speed gearbox which incorporated a multi-disc friction clutch to smooth out the speed changes. The speed-change gearbox was operated by a lever and all speeds could be changed without having to move a belt  from pulley to pulley. The heat-treated spindle with a Type D1-4" nose and running in SKF type N.N.30.K double-row cylindrical roller bearings was bored.

1 1/4" and accepted collets up to 1" in capacity. Filtered oil was pumped automatically to the headstock, speed-change and screwcutting gearboxes whilst the apron was lubricated by a small pump contained within its base which was activated by the sliding action of the carriage assembly. The lathe bed was constructed from a high-grade nickel iron,  machined and flame hardened,  provided with what the designers considered the best combination of V and flat surfaces to locate and maintain the relative positions the headstock, carriage and tailstock over a very long service life. The lathe was mounted on a cast-iron base of great weight and rigidity.

The Mk. 2 version was produced as the "1024 VSL" which, whilst having the same capacity and being mechanically almost identical to the Mk. 1. The overall view of the Mk 2 was enhanced to give the more modern look by altering the rounded shapes of the headstock, tailstock and top slide castings to a more appealing square shape this made it look modern with a tool tray cast into the headstock lid, it was fitted with a very effective push-button-controlled variable-speed drive unit that gave both forward and reverse speeds from 40 to 2500 rpm from a 3-phase, 3 hp (2.25 Kw) motor.

Dual metric/English micrometer dials and a coolant system were fitted as standard and the automatic lubrication of the leadscrew, saddle, apron and headstock was carried over from the Mk. 1.

Smart and Brown concentrated on toolroom-class lathes. They quickly developed a range of  ingenously designed machines which found favour in toolrooms and research departments all over the world. All Smart & Brown lathes were superbly finished, built to the very highest standards and included many thoughtful touches to help the operator.